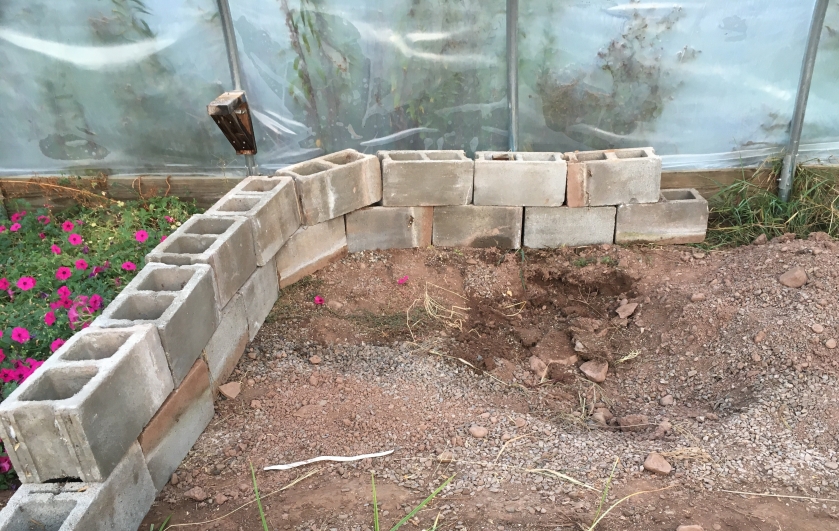 I know, I know, that is a thing of beauty! But seriously, that is the beginning of my pond in the greenhouse. Water has one of the highest capacities to hold heat of pretty any much material on Earth so it is a great way to keep a greenhouse warm at night when the sun isn’t shining and you haven’t figured out how the furnaces work and don’t really want to. So I made a pond – I dug a bit, I used approximately fifteen tons of cinder blocks (or at least that is how my back feels), I got a pond liner, and I filled it with some water.

And now I have to undo all of that.

Silly me figured that the location I was building it was a good one since it was close to the electrical outlets my dad put in (thanks Bernavel!), and I will need a pump in the pond to keep the water moving and fulfill my dreams of some crazy pond-based irrigation system.

(And yeah I know – that is a super sweet phone charger/speaker set up there. Also the outlets point down to avoid any water situations, but don’t worry – they are GFCI. Safety First!)

But when the outlets were installed it was about mid-summer and that general area was plenty sunny. Now that it’s mid-fall that area is not so sunny. There are some pretty large pine trees close enough to the greenhouse on the southern side that it blocks some of the midday sun in part of the greenhouse. This is not an ideally situated greenhouse – if I were starting from scratch I would have oriented the greenhouse perpendicular to where it is now and set it further back from the trees, thus allowing the most sun absorption during the day. But you get what you get.

And what I got is a pond that is currently in the shade the better part of the day at the time of year when I need it most to retain heat.

And so the pond will be moved. Luckily I didn’t fill it all the way since I was going more for “proof of concept” and conceptually it is a pond in its ability to hold water – cold water.

(Note: it did drop below freezing last night and the low in the greenhouse was only 38 degrees. I’m not sure if the pond had anything to do with that, but at least my plants are still alive)